I’ve recently come home from the beautiful city of Nice in the South of France. Glamour, Mediterranean sunshine and mega-yachts are three phrases often used when describing the Côte d’Azur, and they are true (particularly of Monaco, St Tropez & Cannes) but I feel that there’s something more to Nice thanks to the bustling squares and winding old town streets.

Perfect for a quick weekend away out of London, Nice offers easy access from the airport (don’t bother with a taxi, the airport bus is so much cheaper) and is on a fantastic train route meaning lunch in Monte Carlo is perfectly doable. We arrived late on Friday and found it more than easy to stay out till the early hours wining and dining in the square of Cours Saleya.

On Saturday, we enjoyed a trip to Monaco (keep reading for logistics) seeing the F1 circuit, drinking aperol and rosé on Quai Louis II (which is right on the harbour), and taking in the flurry of revving Porsche and Ferraris. And on Sunday we explored Nice – from the city viewpoint at Castle Hill (ignore the reviews of it being a long climb as it’s really not and there’s a lift) to the famous Finocchio ice creams, ending with a walk down the promenade before some final vin at Le Méridien’s rooftop terrace. If you’re heading there too, this walking tour might be good to follow. 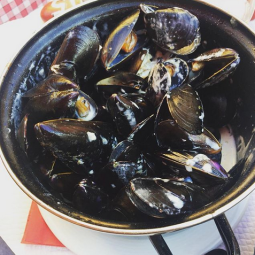 This part of Southern France is hard to describe because it’s got a much more Mediterranean vibe than inland France. It’s best likened to the likes of Salcombe, Dartmouth and Brixham in South Devon, which got me thinking – does the French Riviera trump the English?

Well France has the weather and great wine, of course, but the seafood on the south coast of Devon is world-class (providing you go to the right restaurants! If in doubt, go to Rockfish for affordable but good seafood). But my trip to Nice has got me longing to go back and explore the lesser known coastal towns – so it wins my vote. I’ve stayed in Dartmouth a few times before the tourist season properly starts, and would still recommend it if you’re looking for something a bit closer to home.

Travel: £65 flights from Stansted to Nice with Ryanair; Great Western Railway (GWR) trains to Totnes for the south Devon coast. Nice airport bus costs just €1.50 while a taxi one-way was €45.

Travel from Nice to Monaco on the bus (€1.50) or the train (c€4). The bus route is scenic but not great for anyone who minds standing or tends to get travel sick (the coast has a fair few bends along it!).

Accomodation: Nice old town AirBnB at £100 a night; the Dartmouth Boutique B&B at £90 a night.