Finding myself with a free weekend in London, I set myself a challenge of doing a bit of self-development (or perhaps just a form of mindfulness that doesn’t involve meditating) with some activities I wouldn’t normally do.  The only criteria were for each activity to be below £40 and far away from the usual tourist stuff.  I’d been a tour guide in a previous life, so I’ve spent more than enough painful hours herded around the city’s main visitor attractions.

After a quick look online, it soon became a two-way challenge.  As someone who’d been the art class dunce at school, I challenged Popup Painting to send me home with a recognisable version of Monet’s Water Lilies.  Booked through Obby, the class was positioned as a fun balance between a paintbrush and a glass of wine.  For an art duffer it sounded nicely non-threatening.

I was a little apprehensive about going alone, assuming that it would be full of groups of friends having a different kind of Friday night out.  Of course it was, but it was easy enough to talk to the people painting at your elbow.  We were instructed by a ‘real artist’ through the different layers of colour to build up our own impression of an Impressionist masterpiece.  As Edith Piaf and other French classics played in the background, it was easy to lose yourself in the brushstrokes and pretend that it was serious.  At the end of the two and a half hour class I had a colourful canvas that I’ll be happy to hang in an out-of-the-way place.  As a painting it’s pitiable, but it’s better than I’d have thought myself capable of.  And it certainly improves with distance!

The next day I set off for a walking tour of South East London’s Deptford by Footprints of London.  Deptford isn’t renowned as a tourist spot, nor is it scenic, but it has tons of social history that’s tied together in a really original way by the walk’s guide, Sean Patterson. Sean developed the walk from his Master’s dissertation on the Poverty Maps drawn up at the end of the 19th century by philanthropist Charles Booth. Booth walked the streets of Deptford, noting the poverty of the area and detailing the housing, the architecture and the people he met.

As we walked, Sean read from Booth’s notes to cast us back to how a particular alleyway had been at that time.  Sean’s enthusiasm for his specialist subject was infectious, and we all took turns to read aloud from his notes.  It’s one of the longer walking tours at 3.5 hours and the short stop in the Dog and Bell pub was very welcome.

I really liked how the historical contexts were brought up to date with musings on gentrification and the changing status of the area.  Reading from estate agent prose, Sean showed us how Deptford is gradually shedding its status as somewhere to avoid, overshadowed by its more glamorous neighbour of Greenwich.  It was a lovely example of how the selling blurbs of estate agents can be very telling about what’s going on or what’s in the pipeline for an area.

Another significant aspect that Sean pointed out was the variety of food providers.  They, too, can reflect how an area is undergoing changes, as well as how it’s shaped by incomers from other parts of the world.  Being a shipbuilding town, Deptford has long had a diverse population that’s been celebrated through food culture.  This particularly interested me as I’ve studied a rather different migration context, (the British in France), where the incomers often distance themselves from the British food shops, tearooms and so on.

On Sunday I headed for Southwark for a class on cyanotype printing at the Calder Theatre Bookshop that also called itself a Bookshop Theatre (so which came first, I wonder?).  In the tiny basement, while actors rehearsed their lines above our heads, Magda Kuca talked us through historical photographic techniques, showing us some wonderful examples before letting us loose with a pile of foliage to make our own Prussian blue prints of ferns, petals and leaves. 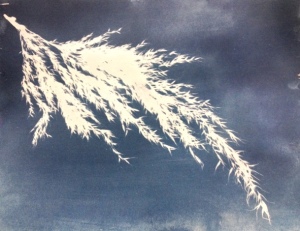 It was refreshing to see a young person so enthusiastic about methods that have long been superseded by film and then digital methods. These ancient techniques offer so much scope to be creative beyond the instant ‘moments’ of digital photography.   I admitted to her that I still had my old film SLR that I’d saved up for by working in a chippy almost 40 years ago. Magda smiled, not with amusement at the thought of the pre-digital stone age, but with respect.  ‘Get it out and start using it again,’ she said.  You know, I just might do that.

So other than filling my weekend with new experiences, people, and knowledge, what did I get out of it? Well I can’t tell you how refreshing it is to get out of the norm and do something different. Just as I might get out my old SLR, why not plan a weekend doing things you wouldn’t normally do – you might like it!

One thought on “Footprints, paint and cyanotypes in London: a weekend of trying new things”